JOAN MIRO FOUNDATION: WORKS AND PAINTINGS YOU MUST CHECK OUT 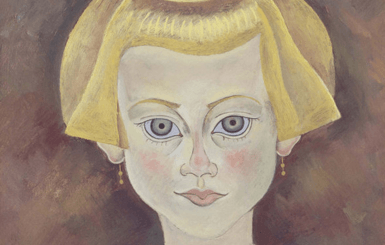 The Joan Miro Foundation is one of the best museums in Barcelona, together with the Picasso Museum and the MNAC, and one advantage of the Miro Museum versus the Picasso Museum, is that it follows the whole evolution of Miro from his youth all the way to the end of his life, including from paintings to sculpture, Miro prints and lithographs. Today we’ve selected for you 5 paintings that will best help you understand his art and symbolism.

These are our favorite works Joan Miro works:

Portrait of a Young Girl

After passing a room dedicated to Miro Sculptures, you’ll start the visit with his early years. Portrait of a Young Girl is our favorite example in this museum of the first time that the artist starts showing a style of his own, rather than copying other people trends: after the huge failure of his first art exhibit in a famous art gallery in Barcelona, he starts finding his own personal way with what’s been called the “Detailist Period”. Here small details such as the girl’s eyelashes or the button of her shirt acquire a fascinating importance.

Flame in the Space and Naked Woman

Once in France, Miro joins the Surrealism movement and soon starts playing with the ideas inspired by the world of dreams. That opens up a whole new world of possibilities and freedom. In 1932 he starts experimenting with colors and balance. Flame in the Space and Naked Woman is one of our favorite Joan Miro works to study how body deformities appear in order to facilitate an harmony and balance in the colors he’s using. 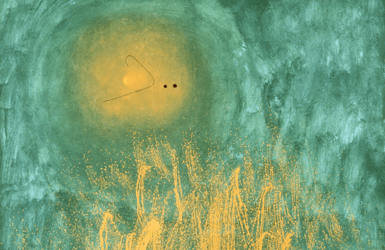 As a result of the terrible times of the Spanish Civil war and World War II, Miró develops a complex artistic language based on the opposition of sky and earth, dream and reality, made of stars, moons, planets and birds. It’s his personal way to try to evade from all the suffering he sees in the world. From all the Joan Miro works in this museum, we’ve chosen this one as one of the most complete examples of his symbolism. You’ll find stars, planets, birds that have evolved into lines evoking the trajectory of the flight of the bird, a woman (three hairs signaling she’s a person, and a rhomboidal shape representing the lady’s vagina) who tries to scape by extending her neck wanting to catch the “ladder of scape” that will take her to the dream world.

In 1937, the moment when he’s developing a, Joan Miró paints his own self portrait. Before selling it, he asks a specialist to make a copy of it (you can actually still see the faint grid the copyist used). A couple of decades later, Miro finds that copy in his studio and is fascinated to see how much his style has evolved: from a profusion of symbols to just a few minimalistic but very expressive lines. He’s then inspired to add a second self-portrait on top of that copy. This Self-Portrait is then two paintings in one.

Already a famous and renowned artist, in the 1960’s Joan Miró gets to travel to the USA where he’s fascinated by the expressiveness of the Action Painting, and Japan, where he discovers the gentleness and minimalism of Asian art. Both travels will immensely inspire him and transform his style. In 1968 Miró creates a pair of paintings designed to be displayed together, although unfortunately they were finally sold appart. One of them is currently owned by a grandson of the artist, while the other was purchased by the most important collector of Joan Miró works, the Japanese Kazumasa Katsuta who signed a lease of some of the paintings of his collection with the Joan Miro Foundation. Hair Chased by Two Planets is one of them.

AND BONUS! Where to find other Joan Miro Works in Barcelona: 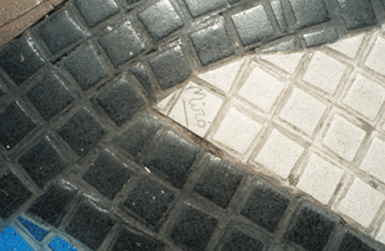 A sculpture, a mosaic and… the street where he lived

At the foot of the Hill of Montjuic, behind the former Las Arenas Bullring (now a shopping mall), is located the Parc de l’Escorxador (although many people mistakenly call it the Joan Miro Park). In one corner rises a giant Miro sculpture: Woman and Bird. To see the Mosaic by Miro you need to head to la Rambla. If you are walking down from Plaça Catalunya, after passing the Boqueria Market you’ll reach an open space where 4 streets converge (Hospital, Sant Pau, Cardenal Cassanyes and Boqueria). Rather than looking up to admire the dragon and other Asian-looking decoration of the exotic Bruno Cuadras house, keep looking down to the pavement or you are likely to step over the mosaic and totally miss it: If you find yourself passing by the Liceu Opera House, turn around and go back up the street: you missed it already! And since you are in the Old Town, continue descending la Rambla and take the left on c/Ferran. Before reaching Plaça Sant Jaume, on the right, you’ll see a quaint covered alley, Passatge del Credit: a nameplate states that Joan Miró was born and lived in one of its buildings.

By the way, make sure to get your online tickets for the Miro Museum here and skip the lines!

So what about you? Head to the comments below and tells us: are you planning to visit the Miro Museum during your visit to Barcelona?

2 thoughts on “JOAN MIRO FOUNDATION: WORKS AND PAINTINGS YOU MUST CHECK OUT”