SPANISH TURRON: THE SPECIALTIES YOU NEED TO TRY

SO MANY VARIETIES OF TURRON CANDY… WE HELP YOU CHOOSING 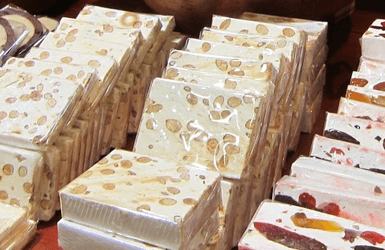 Christmas time has lots of nice things… but one of the best is that you can find this sweet and appetizing candy in every corner! Spanish turron is the most famous dessert in Christmas although it’s believed that it’s an evolution of a Muslim recipe. The first written reference on XVI century assures that was known from two centuries before. It’s said that Antonio Martínez Montiño, King’s Felipe II cook, introduced the turron candy to the court and it quickly spread out amongst the upper class.

We’ll probably never know where it really comes from but I promise you’ll love it.
Let me share with you some of the most popular flavors.

These are our favorite types of Spanish nougat:

The Alacant province (Alicante) is famous for its hard turron. It’s basically made with roasted almonds and honey. Egg-white is used to harden and whiten the mixture. Avoid if you have sensitive teeth. 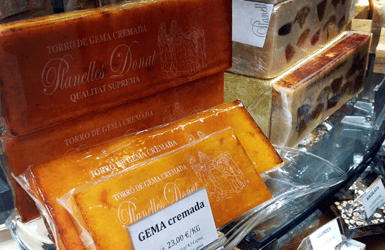 The Xixona area gives the name to this turron candy made of almonds, honey and egg-white as well, mixed and grounded until they become a liquid mass that is then cooked. It’s said turron de Jijona appeared to reuse the left-overs from making Alacant turron.

This is one of my favorite ones! Made of egg yolk, almond and sugar, mostly, to which is added some water and a pinch of cinnamon and grated lemon peel. You can find two types of this turron: with burnt sugar or without burning. It’s said that on 1850 there was a confectioner that had so much demand of this turron that he had no time to let it solidify. He decided then to burn the top and sell it as a crème brûlée turron. 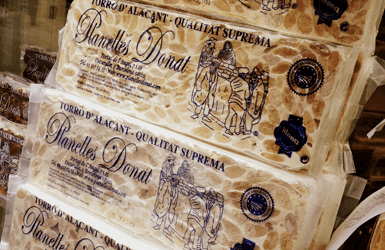 This is a really yummy turron made of cream, walnuts, almonds and sugar. To make it they heat the cream and the sugar and before it boils they add the ground almond. Once it’s all well integrated, the nuts are added, then the mix is poured into moulds to cool off. There’s a similar variety made with marzipan and candied fruit instead of walnuts.

The Catalan village of Agramunt is famous for a turron candy quite similar to the one made in Alacant, but served in round portions instead of bars. It’s said that on 1703 there was an epidemic in Barcelona where the population was suffering from undernourishment. The Guild of Bakers organized a desserts competition. Pere Turró won the prize with a compact mass made of almonds and sugar or honey in between of two obleas.

AND BONUS! What about chocolate turron? Does it exist?

This is probably the newest one. Some years ago only a few flavors of Spanish turron were available in the market, but the choice multiplied whe chocolate was incorporate the chocolate as the new key ingredient. Nowadays, we can find hundreds of chocolate turrón with different flavors: Black chocolate, with milk, with liquor, truffle, nuts…  The most common is chocolate with puffed rice turron for kids, and almond or hazelnut chocolate turron for adults.

So what about you? Tell us in the comments: what is your favorite Spanish nougat?