Antoni Gaudi built three apartment buildings in Barcelona: Casa Calvet, Casa Batllo and Casa Mila (Pedrera). Casa Calvet was built during his youth, it’s not open to the public except for the restaurant in the street level, and it doesn’t look that much like a Gaudi site from the outside yet (although the entrance hall is spectacular – too bad you can’t see it unless you live there!).

Casa Batllo is considered the first Gaudi’s masterpiece, and Casa Mila was the last project he accepted before focusing completely in the Sagrada Familia project.

If you are coming to Barcelona, you should plan to go inside at least one of them. So to help you figuring out which one to choose, today we want to share with you some interesting Casa Batllo facts that will make you appreciate it better and maybe inspire you to visit it.
TAKE A PRIVATE TOUR OF CASA BATLLO WITH US

These are our favorite facts on Casa Batllo:

The symbolism of the façade

When walking along Passeig de Gràcia you can’t miss Casa Batlló’s colorful façade. Its blues, greens and pinks catch the eye of the people passing buy, and the unusual shapes of the balconies and the rooftop make you stop and wander what does it represent.

Actually, Gaudi never shared his interpretation but there are many theories about its symbolism. Some compare it to Monet waterlilies, some other to the Carnival of Venice. When the building was built locals laughed at it and said it was a House of Bones or a House of Yawning.

Gaudi was not only into fantasy and funky shapes, but his ultimate goal was always to create structures that were convenient and comfortable to use. The big balcony of the main floor is made of several huge windows that let the sunshine in (and allowed the Batllo to see and be seen from the street).

In order to maximize the space in the living-room, he created a smart system of pulleys to lift the windows instead of opening them inwards or outwards. Pay also attention to the interesting ventilation slots. 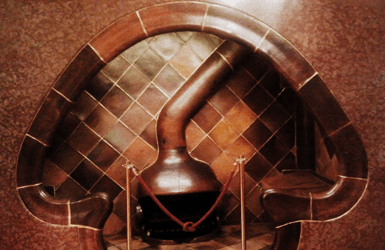 The windows of the balcony

Gaudi was not only into fantasy and funky shapes, but his ultimate goal was always to create structures that were convenient and comfortable to use. The big balcony of the main floor is made of several huge windows that let the sunshine in (and allowed the Batllo to see and be seen from the street).

In order to maximize the space in the living-room, he created a smart system of pulleys to lift the windows instead of opening them inwards or outwards. Pay also attention to the interesting ventilation slots.

Light was one of Gaudi’s obsessions, and not many people are aware of the fact that Gaudi’s Casa Batllo wasn’t built from scratch, but instead it was a refurbishment of a previous structure… that used to be quite dark inside. Gaudi figured out a few tricks to bring light into the building, and those can be guessed when walking up the stairs. 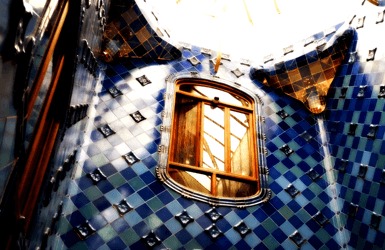 First of all, he connected two independent patios that where separated by a closed stairwell, by opening up balconies into the patios. Now he had one single large and luminous patio with the stairs and the elevator in the middle.

Then, he covered the walls with blue tiles that are darker at the top and get lighter as you go down – this way the light is reflected down and reaches the bottom floors. He finally played with the size of the windows that are smaller at the top and larger at the bottom, so every floor would receive the same amount of light.

The belly of the dragon

Rooftops were often the ugliest part of a building, where smoke pipes and water tanks were located – not the best place to hung out. But for Gaudi they were an opportunity to be playful and give a final touch to his buildings.

He designed colorful chimneys, and hid the water tank inside what from the street looks like the dragon of Saint George. The tank isn’t there anymore, but after Casa Batllo restoration they put a modern fountain inside that evokes the watery use of that space.

AND BONUS! Should you visit Casa Batllo or Casa Mila while in Barcelona?

Which is better Casa Batllo or La Pedrera?

Located just three blocks from each other, both buildings are icons of the Barcelona architecture, and belong to any list of the 10 must see in Barcelona. But which one should you choose? While Casa Batllo is more colorful and appealing from inside, Casa Mila offers maybe more to see inside (plus it’s a couple of euro cheaper).

Casa Batllo is empty inside, but that allows you to appreciate the structure of the building better, and being so colorful it offers plenty of photo opportunities. Instead Casa Mila is great for those who want to learn more about Gaudi (since there is a whole exhibit about his work in the attic) and see how people leaved in the early 1900’s – there is an apartment decorated with antiques from the period.

Also, the Casa Mila rooftop is bigger and more impressive than Casa Batllo’s, and it offers better views, but the visit takes much longer than Casa Batllo (so Batllo is a better choice if you are short of time). Check out this other post to compare Casa Batllo and Casa Mila.

What are your favorite Casa Batllo facts and curiosities?