Best Churches In Barcelona To Visit

Churches are a very important part of the European history and architecture. Not only they were remarkable buildings and symbols of the religious power, but they were also a meeting place for the locals, where to celebrate life events. And since most local traditions have a Christian origin, lots of them would be celebrated in churches or near them, as well. 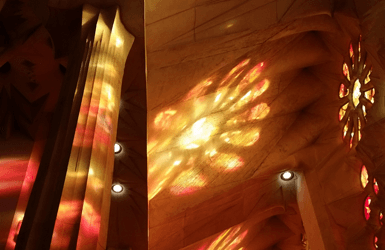 Barcelona has deep Christian roots, Catholic to be more precise, which is why churches are overly present and make part of any top site list. And while one might think “seen one church, seen all of them”, that’s not really true: each local church has its own uniqueness, either it is their historical importance, their religious leadership or their beautiful architecture. As local tour guides, we can’t but be passionate about them. And this is why today we want to share with you which are the ones that any church lover should visit.

These are the top churches in Barcelona:

It’s no secret that the largest church in the city (and second in the world), Antoni Gaudi’s masterpiece, is the very top must-see in town. But did you know it’s not a Cathedral? Cathedral is the title given to the See of the Bishop, and in Barcelona there’s been bishops for centuries, way before Gaudi was born. And the bishop won’t move to a brand new church just because it’s fancier… tradition matters!

The Sagrada Familia is first an Expiatory Temple, because it’s paid with money coming from donations in exchange of having your sins expired (or forgiven). Then it’s also the Parrish Church of the neighborhood. But most important, since the inside was completed and dedicated by Pope Benedict in 2010, it’s also become a Basilica – which is a special title that only a Pope an award to a church, in recognition for its importance.

Only churches in Rome can be “Major Basilicas” – in the rest of the world they are “Minor Basilicas”, and in Barcelona there are 9 of them. We offer 1.5 hour private tours of Sagrada Familia, and most of our half day and full day tours take you there, too.

Cathedral of Saint Eulàlia and the Holy Cross

The “real” Cathedral of Barcelona is dedicated to the first patron saint of Barcelona, Saint Eulàlia, a Christian girl that according to the legend lived in Barcelona and was 13 years old when the Roman discovered she was a Christian and decided to torture her in 13 different ways until she was killed. Her remains are kept in the Crypt of the Cathedral. 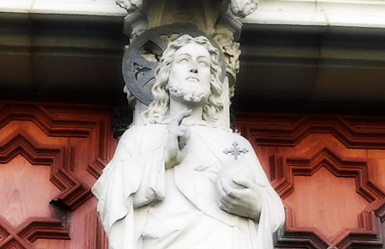 WANT A PRIVATE TOUR OF THE CATHEDRAL OF SAINT EULALIA?

This church, that by the way has also been a basilica since the IV century, is also dedicated to the Holy Cross, that crowns the highest tower of the building. A historical choir, a cloister with noisy gees and its artistically decorated site chapels are other remarkable areas of the Cathedral that no visitor should miss. Learn more about the Catedral de Barcelona in this older post in our blog.

Just a few blocks away from the Cathedral you’ll find a Gothic Church built over Romanesque and Early Christian remains. Even many locals don’t know that this church was the Catholic Cathedral of Barcelona during the Visigoth Times, when the Cathedral of Saint Eulàlia was not Catholic but Arian (an old Christian trend that believed Jesus wasn’t divine).

And although it is not confirmed, there are many chances it was also used as a Cathedral during the short domination of the Moors in the 700’s, when the other Cathedral was turned a mosque. There are archaeological works studying the underground of the building, and they will hopefully reveal more secrets from the fascinating past of this church, that could even have been built on top of the catacombs where the early Christians hid from the Romans. By the way, Sants Just i Pastor is also a Basilica.

One of the few Baroque churches in Barcelona, you’ll find it hidden in the alleys of the South of the Gothic Quarter, just two blocks from the Port Vell Marina. It is hear where is worshiped the current Patron Saint of Barcelona: Our Lady of Mercy, la Mare de Déu de la Mercè, who took the place of Saint Eulàlia in 1637 after the Council of the Hundred (the old city council of the Barcelona) asked her to save the city from a plague of locusts that were devastating the local crops.

It is said that Saint Eulàlia cries every September 24th, when the city celebrates the Day of La Mercè, and that’s why it usually rains that day. The FC Barcelona team pilgrims to this church (a basilica since 1918) to offer our Lady the trophies they win.

A famous novel called The Cathedral of the Sea by Ildefonso Falcones (available on Itunes and Amazon) describes the construction of this gorgeous church in the Born quarter. But despite what the novel calls it, it’s not a Cathedral either (the reasons that apply to Sagrada Familia also apply here). It is however a Basilica since 1923, and also a very large church with elegant and thin tall columns and some of the best stained-glasses in town.

Because of its beauty, the high society often chooses it to celebrate their weddings (in fact, unless you have at least 200 guests it feels like it’s pretty empty). Evil tongues say that Infanta Elena, sister of the current Spanish king, wanted to get marry here but she was wasn’t allowed by her father, who stated a daughter of a king was to get married in the Cathedral. BTW, two more Catholic churches in Barcelona you shouldn’t miss are Santa Anna and the Basilica de Santa Maria del Pi.

AND BONUS! What is that building on top of the Tibidabo mountain? Is it a castle or a church?

On top of the Tibidabo Hill, surrounded by the rides of an amusement park, stands out what looks like a quite impressive building from afar: is it a castle? is it a church? It’s the church of the Holy Heart of the Tibidabo, both a Basilica and an Expiatory Temple. The building is composed of two different spaces: the crypt at the bottom (not a burial area, but a full church by itself), and the upper temple, from where you can access the elevator that takes you to the of the towers to admire breathtaking views over Barcelona, the Collserola range and the valleys behind it. They have run a Perpetual Worshiping that anyone can join in a dedicated chapel of the crypt since 1951. 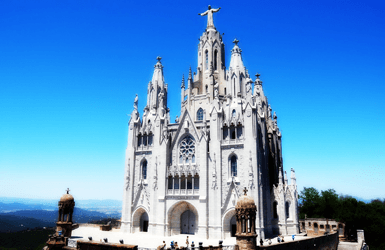 What Barcelona churches are your favorite?