In Catalonia, the region around Barcelona, the weather isn’t super cold. Snow only catches up in the Pyrenees mountains. But it’s cold enough to feel winter is finally here. We started eating calorie-packed foods such as sweet potatoes and panellets for All Saints Day, and now we are ready for more.

Christmas is in the air. Cities and towns get ready to celebrate the holly season with their families and friends. We want to decorate our homes, we want to feel cozy. Join us discovering what are the top Christmas traditions in our land!
BARCELONA WITH A LOCAL FRIEND THIS CHRISTMAS

How to spend an authentic Christmas in Catalonia

What poop has to do with Christmas

Catalan people have a scatological sense of humor. Poop can be fun rather than yucky or disrespectful. And that’s why it plays its own role during Christmas… not once but twice!

It all starts with the Nativity set, where kids hide a little figurine of a farmer crouching, trousers down, pooping. Of course it’s hidden: nobody poops in the middle of the way! And it’s a good thing: poop is a natural fertilizer of the land, that will bring wealth to the family.

Then on Christmas Eve Santa sends his Catalan assistant to deliver the presents: the Pooping Log. It’s a tree trunk that kids have been feeding all month-long. Of course! They want it to poop as many presents as possible! And that’s what it does after the children hit it with a stick singing a song that asks it to poop presents for them.

December 13 is the Day of Saint Lucia, Santa Llúcia in Catalan. Since 1786, it’s been the traditional day to celebrate a Christmas market in front of the Cathedral of Barcelona. There were sold mostly Nativity figurines and herbal decorations. 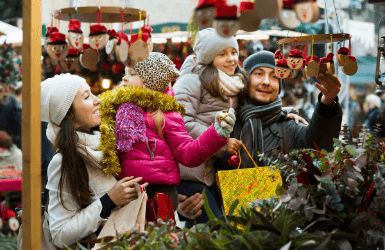 BARRI GOTIC THIS CHRISTMAS WITH US

Since then, the Christmas market has grown to include Christmas tree items and other Christmas decorations, as well as handmade gifts and crafts. It started lasting more days. And the lack of space led to some merchants to start a second market in front of the Sagrada Familia.

Outside of Barcelona, not all villages and towns celebrate a Christmas market. But there are some that organize very popular themed Christmas fairs around fir trees, roosters, handmade Nativity figurines… You can read more about the Catalan Christmas Markets here.

Rekindling the stories and situations around the birth of Baby Jesus is a main theme in Catalonia during Christmas. Besides Nativities, we have two ways of recreating them with “real people”. Pastorets is the name of a theater play that many amateur theater companies (as well as kids in catholic schools) perform in December. It usually includes scenes about the Angel announcing Mary that she’ll be a mother, her visit to her cousin Isabel, the trip to Bethlehem where they are denied shelter repeated times, the birth in the stable, the Angel announcing the shepherds that Jesus is born, and the arrival of the Wine Men following the Star.

More stablished companies might choose to play the version of writer Josep Maria Folch i Torres, that revolves around the story of two shepherds, Lluquet and Rovelló, who will have to fight against the Devil to protect the Baby Jesus. In Barcelona, it’s usually played at the Teatre de Sarrià and the Centre de Gràcia.

In the other hand, some villages in Catalonia keep alive the tradition of “Pessebres Vivents”, living Nativities. In an area of the village arranged in purpose for the event, an itinerary is organized where the locals have set up a variety of scenes related to the birth of Jesus. Visitors are invited to walk down the path stopping to watch each scene being played before moving on to the next. It usually takes place at night, what gives the show a more magical appearance. There’s over 50 villages organizing Pessebres Vivents, but the most famous one is the one in Corbera de Llobregat, with over 200 participants.

When talking about savory flavors, the Catalan tradition is still very connected with the countryside life. Escudella i Carn d’Olla is an earthy soup where Catalan people would throw as many ingredients as they could to make it very rich. 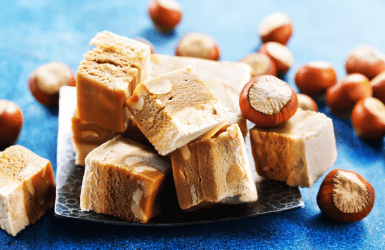 FOOD TOURS IN BARCELONA FOR CHRISTMAS

Large meat balls, sausages, chicken and pork bits, beans and chickpeas, cabbage, potatoes, onions, leak, carrots, pumpkin, turnips…  The broth is used to cook “galets” pasta as a starter. Then the main course are a big platter of the cooked ingredients that satisfies the hungriest guest. The left-overs go to the filling of cannelloni the next day.

But Christmas is a time for sweets. Everyone is waiting for desserts. Different types of marzipan are served, along with neules (rolled wafers), polvoron shortbreads, and of course turron of many flavors: the Christmas Spanish nougat.

Mass on Christmas Eve has traditionally been a spiritual moment for celebrating… and socializing. Called “Missa del Gall”, the Mass of the Rooster, many parish churches organize gatherings and even meals after mass is over, so the parishioners can celebrate together in a less solemn setting than a mass.

It usually starts by midnight, but some churches are aware of how difficult it is for families to keep the youngest ones awake until that late and have started doing an alternative “Chick mass” a bit earlier. Find in this other post our favorite Christmas masses in Barcelona.

AND BONUS! Is Christmas over after December 26?

What other Christmas celebrations to expect

Christmas in Catalonia isn’t over on December 25. The next day is Sant Esteve – Saint Steven’s Day or Boxing Day. December 28 it’s the Day of the Innocents, the local version of your April Fools. Then of course there’s New Year’s Eve. But the celebrations don’t end there yet!

On January 6th arrive the Wise Men to bring more presents for the kids. There’s parades, and a family meal, and cake. And then children are given one more day to play with their new toys before going back to school around January 8th. That’s the definite end of the Christmas Holidays. 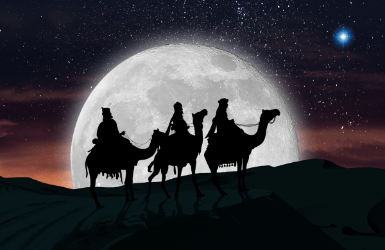 SKIP LINES IN BARCELONA THIS CHRISTMAS WITH US

What are your favorite Christmas traditions?