All the Sagrada Familia architects 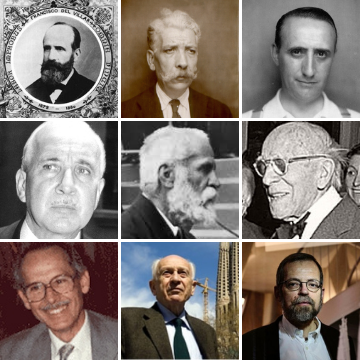 HOW MANY ARCHITECTS HAVE WORKED ON THE SAGRADA FAMILIA?

La Sagrada Familia is the most visited monument in Spain and the masterpiece of the architect Antoni Gaudi. But unlike other projects, there’s been more than one architect involved in its construction. To start with, this church is a huge project where a team of architects work under the orders of a chief architect that holds the ultimate responsibility over it.

But then, what happens when the project spands over 3 different centuries? That’s when younger architects come to replace the ones that retire, resign or pass away.

And that's happened several times in the history of the Sagrada Familia Church. Today I invite you to get acquainted with the chief Sagrada Familia architects thourghout history. Enjoy!
PRIVATE LA SAGRADA FAMILIA GUIDED TOUR

Learn who were the Sagrada Familia architects

Surprise! Antoni Gaudi wasn’t the original architect of the Sagrada Familia. Born in Murcia in 1828, he majored in Architecture in Madrid and later on his professional career took him to Barcelona. He was already an experienced architect when he was nominated head architect of the Diocesis of Barcelona in 1874, specializing in churches.

Just three years later, the Catholic association of Devotees of Saint Joseph asked him to design a church dedicated to the Holy Family (Jesus, Mary and Joseph). The project didn’t start until 1882, but just one year later, Francisco de Paula del Villar resigned due to some disagreements with the president of the association, Mr. Bocabella, and his advisers. Can you guess who came to replace him?

Antoni Gaudi was still a young architect with little experience, when the advisors of Mr. Bocabella appointed him to replace Francisco de Paula del Villar. Nevertheless, he had a strong personality, immense creativity and wasn't scared of challenges.
PRIVATE GAUDI ARCHITECTURE TOUR IN BARCELONA

When Gaudi examined the Neo-Gothic project left by his predecessor, he accepted the job with the condition he’d be able to change the whole thing. From the beginning, he envisioned a church that would take generations to complete.

Of course, he knew he wouldn’t last forever, so one of his priorities would be to leave a design that the next generations could understand without him being around. He worked with plaster models to generated a visual idea of what he had in mind. Year after year, he refined a mathematical language that he applied to his architecture and he shared it with his younger followers. And to date, his teachings have persisted through the ones that followed him.

He had to finish the crypt in the originally planned Gothic revival style. But once he started working over the ground, he was able to get outside of the box. He would work in the Sagrada Familia church the last 43 years of his life, until his death in 1926. At first, overlapping it with other projects, but the last decade or so, he completely focused on it rejecting any other job he was offered.

Sugrañes worked for Gaudi in many projects, but of course the Sagrada Familia Church was the most important of them. They shared a sincere friendship and trust in each other, up to the point that Gaudi nominated him his will trustee.

After his master’s death he took over the direction of the construction works for the next 10 years, until the Spanish Civil War started in 1936. Unfortunately, a fire destroyed the workshop where Gaudi’s models and plans were kept, and that traumatized Sugrañes so much that he died just 2 years later in despair.

40 years younger than Gaudi, at the end of his architecture studies he entered to work at the Sagrada Familia as a draftsman and coordinator of the different crafts workshops there.
DREAM OF AN ALL-GAUDI DAY?

When Antoni Gaudí passed away, he became the right hand of Domènech Sugrañes. After Sugrañes passed away and once the Spanish Civil War ended in 1939, he became the new head of the project. His first task was to restore the crypt, that had been burnt during the war, and to repair Gaudi’s plaster models, those that Sugrañes thought lost forever.

It’s here where Gaudi’s mathematic genius plays a crucial role, because math is an exact science. There were large chunks of models were missing, Gaudi’s elegant mathematic rules allow us to figure out with a lot of precision what goes there.

Francesc Quintana was also the initiator of the construction of the Passion Façade, until his death in 1966.

Three years older than Francesc de Paula Quintana, he was also involved in the construction of Sagrada Familia under Antoni Gaudi, and in the 1950's he joined Quintana to co-direct the construction of the Passion Façade.
CHECK OUT OUR SAGRADA FAMILIA GOTHIC QUARTER TOUR

A big researcher and specialist in Gaudi’s work, he became the director of the works after Quintana’s death and until 1974.

Lluís Bonet was a distant relative of Josep Puig i Cadafalch, one of Gaudi's most famous competitors, the young Lluís decided soon in his life he wanted to be an architect as well.
CHECK OUR PARK GUELL AND SAGRADA FAMILIA TOUR

He completed his architecture studies with Puig Boada, having visited Gaudi’s studio many times as a student.

When Gaudi’s studio was burnt during the Spanish Civil War, he was one of the people who risked their lives and rushed there to save the remains of the plaster models, and in the next years he worked restoring them. He’d continue collaborating with the construction of the church, while he also developed a career as an independent architect.

In 1962 he joined Quintana and Puig i Boada co-directing with them the construction of the Passion Façade. Then in 1974 he replaced Puig i Boada as a chief architect of the project. In 1982 heart problems forced him to quit, but he continued to be closely attached to the Sagrada Familia. His son Lluís became the priest of the Sagrada Familia crypt, and his son Jordi followed his steps as architect in the church.

Architect and archeologist, he collaborated with Puig i Boada and Lluís Bonet before taking over this last one as a chief architect in the church, until 1983.
TAKE OUR SAGRADA FAMILIA VIRTUAL TOUR

The son of Lluís Bonet was born in 1925, just one year before Antoni Gaudí died. The Sagrada Familia Church became the landscape of his childhood and youth, leading him to graduate as an architect in 1949.
TAKE A GAUDI ONLINE TOUR FROM YOUR OWN HOME

When his father retired, he was offered to replace him at the church, but he was about to be appointed as General Director of Artistic and Cultural Heritage of the Catalan Government, and wasn’t able to accept. But when he lost his political position in 1985 he eventually replaced Cardoner.

In 2012, at 87 years of age and after 27 years of service as a head architect, the Board for the construction decided it was time for younger generations to continue the project.

Jordi Bonet had accomplished so much already: laying down the foundations of the central nave, raising the wood of stone columns inside, and covering it with the parabolic vaults Gaudi dreamt of. In 2010 he had a place of honor in the consecration mass of the church, conducted by Pope Benedict XVI.

Even retired, it’s not unusual to see him in the church, walking around with friends, colleagues and groups connected to his intense associative activities. I still remember with reverence the fascinating 4-hour training tours I received from him when I worked in the Sagrada Familia between 1999 and 2002.

AND FINALLY! How did Gaudi and Guell meet and what was their relationship?

Jordi Fauli joined the architects team of Sagrada Familia 2 years before completing his architecture studies. It was 1990, and he was responsible of incorporating new technologies to the project design.
SEE ALL OUR GAUDI TOURS IN BARCELONA

His doctoral thesis revolved around the columns and vaults of the church. After being for many hears the right hand of Jordi Bonet, he replaced him in 2012. His task is now rising and crowning the central towers: 4 for the Evangelists, one for the Virgin Mary and one for Jesus Christ. History will tell if he’ll also manage to complete the main entrance, the Glory Façade, thus becoming the last of the Sagrada Familia architects.

Did you know there had been so many architects in Sagrada Familia?