OFF THE BEATEN PATH DISTRICTS IN BARCELONA

BARCELONA NEIGHBORHOODS FOR AN AUTHENTIC EXPERIENCE 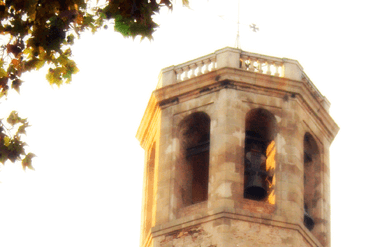 London, Paris, San Francisco, New York City… many people plans their sightseeing according to the districts they want to visit in each place, as each district has its own unique personality. But when it comes to Barcelona it almost seems like there is only the Eixample, the Old Town and Montjuic neighbourhoods. What about the rest of the city? Are all the other neighborhood just boring and not worth exploring? Not at all!

Of course, if your time is limited you should focus in the main sites. But if you have some extra time or if it’s not your first time in the city, we encourage you to go off the beaten path and discover that Barcelona is still beautiful and lively beyond Gaudi and the Gothic Quarter. Today we present you our particular Barcelona neighborhood guide, with a few  great ideas to explore the non touristy Barcelona.

These are our favorite non-touristy neighborhoods in Barcelona:

This Barcelona district used to be an independent village until it was officially absorbed by the city in 1921. You can get there from Plaça Catalunya using the FCG train, that feels pretty much like the metro but with bigger stations (you can actually use the same travel card you’d use for the regular metro or bus). The Sarrià station is right next to the gorgeous modernist Orlandai building, now a community center with a lovely café. Taking the pedestrian street Jaume Piquet will take you to the main street of the neighborhood, Major de Sarrià (you can take a little detour before arriving there to quickly check the quaint Plaça de Sant Vicenç). Anyway, in Major de Sarrià you’ll find the famous Bar Tomàs, making possibly the best patatas bravas in town. A bit further up, you’ll find the traditional cakes of Pastisseria Foix, right where Major de Sarrià becomes a lovely commercial street where the wealthy neighbors shop. Carrer Canet, with its craftman workshops is worth checking out, as well as Plaça del Consell de la Vila where the District Council stands. You’ll finally arrive to Plaça Major de Sarrià, a square that often hosts outdoor markets and is presided by the church of Sant Vicenç. In June you should also check the tiny Placeta del Roser behind it, that will be carpeted by the yellow flowers of its tipuana trees. It’s definitely one of the safest areas to live in Barcelona, and that’s why it’s chosen by many American expats. 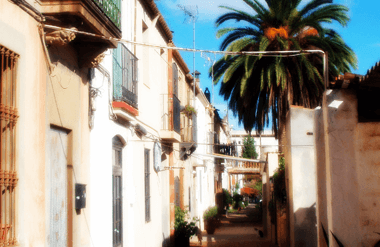 Hop on the yellow line of the subway (L4) to arrive to this quarter that was born around the many textile factories that made Barcelona the Mediterranean Manchester during the Industrial Revolution times in the 1800’s. The main artery of the area is the Rambla del Poblenou: pedestrian in the middle with a lane for cars in each side. Neighbours use it to walk all the way down to the sea (or should I say the pine tree parks along the beach) and enjoy a drink in its many outdoor cafés. The Casino de l’Aliança is one of the activity hubs here: but don’t be fooled by its name: it’s not about gambling, but a meeting point, a dance hall, a concert and theater room, and a place to hold conferences, workshops and more. Very close by, the popular Tio Che is the place to go to taste the best orchata and gelato. But if you want to feel the pulse of the local life, head to Carrer de Marià Aguiló, lined up with local businesses and locals going on their errands. If you like contemporary architecture, the old factories have been transformed in high tech business buildings at the [email protected] Or if you like silence and death doesn’t freak you out, the Cemetery of Poblenou is gorgeous and definitely worth a visit.

The blue line of the subway (L5) will take you to the North of the city, a neighborhood that was also once an independent village in the countryside. Yes, countryside believe it or not: you can still find relevant buildings there that were once farmhouses: the local library and the restaurant Can Cortada are some examples left from that past. It was a humble area, and the women used to walk down to what now is the city center to get the dirty laundry that they would carry back home to wash, then carry it back downtown to deliver it clean. The outdoor washing sinks were their meeting points where they’d work, sing, gossip and laugh together, and you can still see some of them in the Aiguafreda street (while they are public, it almost feels like entering someone’s private yard – so please be respectful when you visit). Plaça Eivissa is the center of the district, where you can’t miss a bite in the popular Quimet d’Horta bar before taking Campoamor street up – the place where the richer neighbors built their dwellings. Don’t miss the Park of the Labyrinth – once the garden of a private mansion and now a public garden with a cypress tree maze inside. 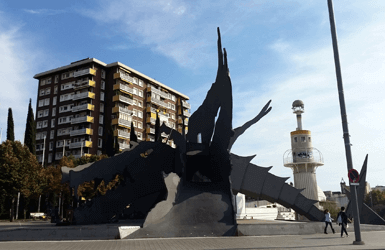 At the foot of the Hill of Montjuic and bordering the Raval district and an end of the Eixample you’ll find this neighborhood that expands from the port all the way to Plaça Espanya. Traditionally a working class district, now it also has become the home to latino immigrants. However, it’s become very popular for its tapas bars and restaurants and its animated nightlife. If you are curious about it, plan an evening walk along Paral·lel Avenue to check out the atmosphere around El Molino (a music hall inspired in the Parisian Moulin Rouge), the always busy Victoria theater and the vintage dance hall Sala Apolo, before checking out the tapas bars on Carrer Blai. During day time, check out the charming Plaça del Sortidor and have a bite at Quimet i Quimet (it’s also open in the evenings, but it’s way more packed). On Sunday morning you can also visit there a shelter from the Spanish Civil War.

The train station from where departs the high speed train to Madrid is named after a popular district that grew beside textile factories that have mostly disappeared over time. However, the area still keeps a working class turned middle class flavor and the community life is very present in the street. An old train shed is now a community center organizing concerts and workshops for the neighbors, and nearby the Plaça d’Osca is still a popular meeting point for the locals. Carrer de Sants is a very busy shopping street with big brands that will make you forget you aren’t in the city center. In the mornings, the Mercat d’Hostafrancs is the perfect place to see people on their grocery shopping before having some nice tapas in the nearby Bodega Monumental. From there, you’ll be walking distance from Plaça Espanya and start exploring the Hill of  Montjuic.

AND BONUS! The district most tourists think they have been to… but they haven’t! 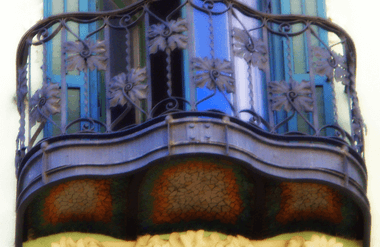 Most tourists think they have been to the Vila de Gràcia because they have walked Passeig de Gràcia street and… they are wrong! Passeig de Gràcia is the old road to Gràcia, which is at the end of it right on top of the Diagonal Avenue. Once also an independent village, here you an still hear people (specially the elderly) saying they are “going to Barcelona” when they are taking the bus or the subway for 10 minutes to get to the city center! To start exploring the neighborhood, I suggest you hop off the subway on the Fontana station of the L3 (green line) and take the lively commercial Asturies street with its local designers and organic stores, passing Plaça del Diamant all the way to Plaça de la Virreina (some Sundays there is swing dancing going on in front of its church). From there, the pedestrian street Torrijos is the home of one of the most popular original version movie cinemas in town: Verdi Park. The parallel Verdi street is famous for its cafés and clothing stores, and at the end of it you’ll find still another plaza: Revolució, where there is one of our favorite gelato shops. A couple of streets further you’ll get to Plaça del Sol, very popular among the young ones for its bars and nightlife, and then you’ll hop to Plaça de la Vila de Gràcia with its clock tower and the town hall, and people enjoying some drinks or tapas in its outdoor cafés. From there you might choose to go back to explore Gran de Gràcia all the way back to the subway station, or just head down to Passeig de Gràcia. Its central location and leisure offer has made it the best place to live in Barcelona for students.

So what about you? Head to the comments below and tells us: What are your favorite neighborhoods in Barcelona and why?