On with our series of tour guide interviews, Maria Jesús is one of the latest additions to our team, and she has quickly gathered a collection of amazing reviews for her tours. A multi-purpose professional, she is fun but knowledgeable, with a strong spirit of service and quirky sense of humour.

She majored in History and Anthropology in college, then worked as a museum docent and a tour escort for groups of Spaniards traveling around Europe. Eventually she realized that she’ll have more fun becoming a local tour guide, and as soon as she passed her exams to get her official license, the local tour operators started hiring her. It was with ForeverBarcelona, though, that she specialized in private tours – and she loves it! 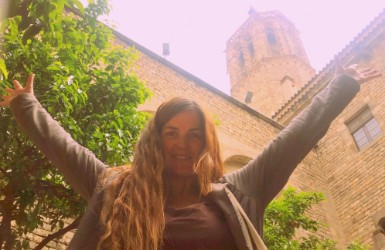 Let’s get to know more about María Jesús:

What is the funniest thing that has happened to you on a tour? I have plenty of stories to tell! But for instance, just a few weeks ago I was touring with a group of American teens and when we stopped at the Olympic Stadium I told them that Harry Styles from One Direction had just offered a concert there. They were so excited! They were huge fans. On with the tour, we were driving up Via Laietana avenue and to our surprise Harry Styles in person was having a photo session in the plaza across the street! They were so excited that of course as soon as we reached the following turnabout I asked the driver of the bus to go back so the girls could see their idol from closer from the bus. I mean, because Harry Styles is more important than visiting the Cathedral, isn’t he? LOL. They were delighted.

What’s your favorite thing to explain in a tour? In the Gothic Quarter, when we enter the square of St. Felip Neri, I love to tell my guests that that plaza… is fake. Really, only two of its buildings were originally there. The rest are what specialists call “traveling buildings”: when Via Laietana avenue was open across the Old Town many buildings were knocked down, but just a few were considered remarkable enough to be dismantled piece by piece and rebuilt somewhere else. And that’s what happened. I see it as a great example of the Catalan mentality to survive, and adapt. And it was a wonderful way to preserve the local heritage. It’s just too bad that there is no plate anywhere to let people know what building was transferred from their original location. I also love this plaza because it allows me to approach many other themes: from the Spanish Civil War bombings, to Antoni Gaudí who used to attend mass in the church of the plaza, to even literature, as one of the characters of the novel The Shadow of the Winds lived here. 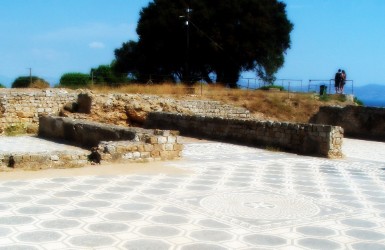 What’s your favorite area in Catalonia? Sant Martí d’Empúries, in the Costa Brava. The Costa Brava is the perfect vacation spot – it has it all: culture, beach, good food… and Empúries is its little Pompeii! A beautiful archaeological site that was the first place where the Greek set foot in Spain. There you find Greek ruins, but also Roman ruins and medieval elements. Mosaics, views over the Mediterranean sea, the combination of culture and nature… And Sant Martí is the hamlet next to it, built where it was once an island. It has charming old streets and great restaurants.

What’s your favorite painting? People that visit the Museum of National Art (MNAC) want to see the Romanesque Section, and particularly the frescoes of Sant Climent and Santa Maria de Taüll. And while the artists displayed all their excellence in the apses of these churches, I really enjoy to discuss instead what’s in the back of the church of Santa María: the Apocalypse, with the Psychostasis of Saint Michael. Romanesque is a naif style that so evidently tries to indoctrinate people, and this is so obvious here. You can see St. Michael weighing the souls: if your soul is light and devoid of sins, you’ll go to heaven. But beware! it’s not enough to just behave: the devil will be there cheating and trying to push the scales down to send you to hell instead! And then you see the damned people burning in the pots of the devils, and a monster with 7 heads eating them. Even non-religious visitors find it fascinating.

What’s your favorite tradition? The Dancing Egg: On Corpus Domini, in certain patios of the Old Town you’ll see eggs dancing on top of the jets of their water fountains. It’s one more of the fascinating but nonsense traditions we have in Catalonia, much like the Pooping Log and the Pooping Man for Christmas. Why would someone make a tiny hole in an egg to empty it, then reseal it with wax and place it on top of a fountain water jet, so it stays there going up and down dancing but never falling, then have people stand in line to see it? Who knows? But that’s what we do, and it’s one of the reasons why our culture is so unique. I love to watch it in the patio of the Marès Museum near the Cathedral, because it’s a wonderful setting that encompasses Roman ruins, with the time of the Catalan Counties and even the Spanish Inquisition. 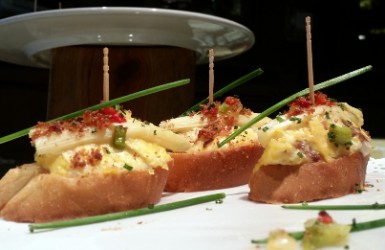 What’s your favorite tapas? I’m a total fan of pintxos, those Basque slices of bread with a variety of toppings. I love the concept of hoping from bar to bar, ordering a bite and a drink and having fun with friends. Food as an excuse to socialize (and as an excuse to drink, too!). I love starting my tapas tours with pintxos, but I always warn my guests that they shouldn’t order more than a couple because they are more filling than you’d think, and to use the Catalan expression, they are only a bite to “kill the worm” – that is, to take the edge off your hunger. My favorite pintxo is that of chistorra: a red thin mildly spicy pork sausage. Yum!

So what about you? Head to the comments below and tells us: What question would you like to ask María Jesús?