EXPLORING THE MEDIEVAL ALLEYS OF THE GOTHIC QUARTER

The narrow alleys of the Gothic Quarter of Barcelona are fascinating, so many secrets and stories are hidden behind it… but when you are walking on your own, you can miss so much! You are walking around, and you like what you see that you don’t understand it fully.

One option is taking a Gothic Quarter walking tour. But if you still prefer to be free to walk where your feet want to take you, we have some ideas for you.Would you like to know the places you shouldn’t miss?

Here are our favorite 5 sites in the Gothic District:

From the religious point of view, it is the most important church in Barcelona. The entrance is free of charge until noon, and after 5:30 PM. Don’t miss the cloister where the geese leave. By the way, for an extra fee you can take the elevator that takes you to the top!

In this plaza stands out the medieval Palace of the Catalan Dynasty in the Middle Ages, and in the and the ground have been excavated the Roman ruins of our city (accessible through the Museum of History of the City). Do you know that in autumn and spring there are local bands of traditional Catalan music playing live and people gathers to dance to ancestral choreographies?

Hidden in a backstreet behind the Cathedral, and sheltered inside the building of the oldest Catalan hiking club, still four columns remain of this temple from 2 millenniums ago. It’s a bit off the beaten path, and that’s why even many locals that even know it exists…

A twisted alley takes you to this char

ming little square that in the month of June is usually covered by yellow flowers fallen off the trees. the walls of the church that presides the plaza show the damage caused by the bomb that fell here during the Spanish Civil War killing over 20 kids that where sheltered in a basement.

According to the records kept in our archives, it would be the oldest synagogue in Europe. You will learn here the history of our Medieval Jewish community, that disappeared after the attacks suffered in 1391.

AND BONUS! Where did Picasso used to hang out in the area? 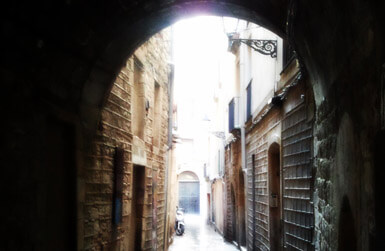 This café in the Gothic District has kept its bohemian atmosphere from the early 1900’s when a young and still unknown Picasso use to hang out there to hear the news arriving from France. Here he also celebrated one of his first art exhibits and even designed the decoration of the restaurant menu. A great place to travel back in time and enjoy a lovely dinner with live music.

What about you? Head to the comments and share with us: What’s your favorite site in the Gothic Quarter?