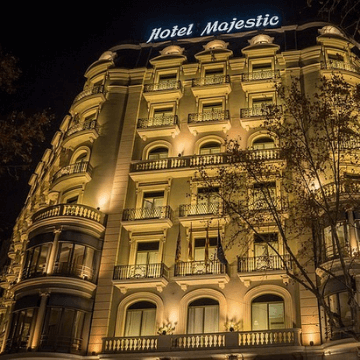 The Majestic Hotel & Spa in Barcelona is one of our guests favorite: every year we pick up lots of guests there taking our tours, and we often hear what they praise and what they don’t like. And honestly, before the refurbishment many would complain about the rooms being too small. But now that the works are over, this old school hotel doesn’t look old-fashioned or boring anymore.

On the contrary: it has become a really exciting and classy place to stay that can totally rival with the Mandarin Oriental down the street and the many other 5-star hotels nearby. If you are still trying to decide where to stay during your Barcelona trip, make sure to read today’s post (you might have a much clearer idea afterwards) 😉
PRIVATE TOURS OF BARCELONA THAT ADAPT TO YOUR NEEDS

This is our Hotel Majestic opinion:

Isn’t it one of the most important things when choosing a hotel? Well, the location of the Majestic Hotel is unbeatable: located right in the center of Passeig de Gràcia, the main street of Barcelona, between two Gaudi masterpieces: Casa Batlló one block down, and Casa Milà (La Pedrera) two blocks up).

There are plenty of great food options in the area, and all the shopping you’ll need. Also, being located in a wide central avenue, reaching it by car or taxi isn’t a problem (unlike for many hotels of the Old Town located in narrow alleys where most taxi drivers will refuse to enter).

The area is also very safe, you are one block away from the train station connecting with the airport and the L3 subway line taking you to La Rambla, the Old Town, Montjuic and the FC Barcelona Stadium, and 3 blocks from L5 taking you to Sagrada Familia – although most of the time you’ll prefer just walking as most sites aren’t really that far. The Tourist Bus also stops by, and the Bus #24 taking you to Park Guell stops also nearby.

The Spa of the Barcelona Hotel Majestic is a dream for all massage lovers. Detox, relaxing, anti-aging, invigorating… They also have a signature collection of premium packages or rituals, including ancient Hawaian and Morocquian techniques, services for couples and a “little princess” manicure and chocolate shake for your young daughter.

And if you have 3 days to spend pampering yourself, make sure to book the Dr. Perricone Anti-Aging Pack including full board at the restaurant of the hotel, 3 facial rituals and access to the hotel solarium, fitness center and outdoor rooftop pool. My only complain is that the hotel spa features only a small water circuit to be used only as a private service.

More hotels with a spa here.

When I’m traveling, after my hard day sightseeing I love to splurge sipping on a lovely drink while watching the sun setting over the city skyline. Don’t you? The rooftop of the Majestic hotel is one of the best places in town to do that. It has a great cocktail bar and a neat pool, and views over the city featuring Sagrada Familia and the unique AGBAR tower, that lits up at night. 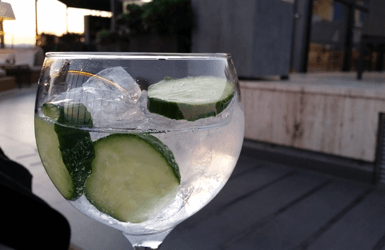 NO LINES IN THE SAGRADA FAMILIA CHURCH FOR YOU

Bonus point: it is open all year around (most hotel rooftop terraces in Barcelona close after the Summer is over). Oh, and if you are coming in the Summer, they organize live music and DJ sessions every Friday evening.

If space is an essential part of your definition of luxury, you’ll love to know that the suites of the Majestic Hotel have been recently renovated and they feel much more spacious now. But if that’s not enough for you, they get you covered as well: across the street from the hotel but belonging to it, an elegant modernist building houses the Residence Apartments where you get to have an entire apartment for 4 to 8 people.

All the comfort of being at home, with the service of a 5-star luxury hotel in 700 to almost 1,000 sq feet – not big for American standards, but trust me, these apartments are as large as most Barcelona apartments (this is Europe…). Or enjoy a penthouse suite just a bit larger for only 2 people (pssst, the Sagrada Familia ones have a hot tub in the terrace!).

There’s also a spectacular Suite Royal of over 5,000 sq feet but… you can’t book it online: you have to check availability and fees with their Commercial Department – Oups that can’t be cheap.

Michelin-star Chef Nandu Jubany was born in the Osona county, in the countryside, what definitely marked his passion for local produce and authentic food, and his will to honor tradition but upgrade it respectfully with the use of new technologies and a touch of fusion and haute cuisine.

He runs the restaurants of the hotel: Condal for the breakfast buffet, the snacks and light meals served at the Dolce Vitae bar at the rooftop, the classic Bar del Majestic where he supervises the pastries, salads and sweets served with your drinks and of course the Restaurant del Majestic, serving breakfast, brunch and lunch. Very close by, in a cozy alley connecting Passeig de Gràcia and Rambla Catalunya, he runs his signature restaurant: Petit Comité, serving memorable lunches and dinners.

AND BONUS! How to get a special deal in such a great hotel:​

The hotel website is your friend: book your room there using the “Smart Rate – Prepaid offer” to get a 10% discount on the official rate. Stays over 4 nights also get a discount rate that includes their incredible breakfast buffet as well (deluxe rooms only). Suites and Penthouses are given a 20% discount (wow) for stays of 3 nights or more with the That Suits Me offer. 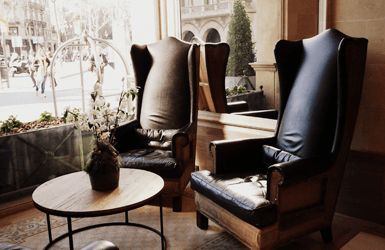 Then, if you are planning to use regularly the Spa, make sure to check their Spa packages and see if that’d be a good deal for you. Finally, are you also traveling to Majorca soon? With the Mediterranean Escape Pack get special fees at both the Barcelona Majestic and the San Francesc Hotel Singular in Palma. Or book through Hotels.com and you’ll get a free night for each 10 nights you book with them if you register using this link. We get a commission too: win-win!

Anything else to add to our Hotel Majestic review?