5 FACTS ON SPANISH MEALS THAT YOU NEED TO KNOW ABOUT

HOW DO MEALS IN SPAIN WORK? Spanish eating habits and times can take you by surprise if you don’t get some information about them before you come to Spain. After all, when traveling, food is one of the  most important things to plan, and often food and meals habits change from country to country (or even from city to city!).

Many times during my Barcelona tours people asks me about the times for meals in Spain and when to go to a restaurant to find locals. The other day, the Galloway were telling me how surprised they were when the restaurant was empty by the time they arrived, but packed by the time they left… That happens often to American visitors! So today I’m sharing with you the main facts you need to know about how Spanish meals work and what are the usual Spain eating times.

Lunch in Spain is usually at 2pm, although anytime between 1pm to 3pm is acceptable. Most restaurants open either at 1pm or 1:30, and close their kitchens around 3.30 or 4pm, although you can stay eating what you’ve already ordered for a bit longer. Spanish lunches are the main meal of the day, so expect them to last between 45min and 1hour (minimum!). Many people working in offices will head to local bars and get a “menú del día”: a set menu of day specials by an affordable price. It’s cheaper and faster than eating à la carte. During the weekends, instead, there is no menú del dia, and the traditional Spanish meal will be longer (upto 2 hours) and include dessert, coffee and a liquor shot. 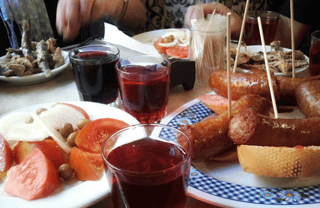 Spanish dinner goes from 8pm to midnight. Most restaurants open either at 8pm or 8:30, and close their kitchens around 11.30 or midnight, although you can stay eating what you’ve already ordered for a bit longer: very rarely they’ll bring the bill to force you to leave (unless you’ve gone way longer than what would be acceptable). Locals hardly ever arrive earlier than 9pm. While at home we usually make lighter dinners, if we go eating out we tend to eat and drink as much as if it was a lunch, then go for a stroll before heading home, to help digestion.

If you need to eat outside of these hours…

Meals in Spain are late, and not everyone is ready to wait until locals are hungry to go to a restaurant. If that’s your case, the easiest choice will be tapas bars, usually opening either at breakfast time or noon and serving food non-stop until late night. Spaniards eat tapas any time of the day. And in this other post you’ll find some restaurants open for early meals in Spain (Barcelona).

And if you don’t have much time…

I know, 1-hour long typical Spanish meals conflict with intensive sightseeing plans! But Barcelona has plenty of gorgeous bakeries where you can get a sandwich or some other quick bite: Look around, I’m sure you have one in less than a couple of blocks from where you are!

Ok, but… how can I stay up until locals’ dinnertime without starving?

The secret to keep up with the Spanish eating habits is called “merienda” (or “berenar”, in Catalan): have a snack around 5 or 6pm. Grab a fruit salad box in the Boqueria Market, have a hot chocolate with churros (that’ll keep you going until 10pm if you need!), or a coffee and croissant at your favorite café. That’s what locals do to survive between lunch and dinner.


AND BONUS! What about breakfast?

Most Spaniards don’t have a big breakfast: a coffee with milk and a toast, a cookie or some cereals and that’s eat. And it’s common to have it at some local cafeteria, bar or bakery on the way to work or school. So if you are into eggs and sausages… I’m afraid it won’t be easy to get them unless they are included in your hotel breakfast buffet. However, until noon a lot of those bars and bakeries will be also selling lovely sandwiches that will definitely keep your stomach happy.

What about you? Head to the comments and tell us: are you planning to adapt to Spanish meals during your trip?